Tbilisi, Georgia
8-23-VI is a monochromatic pavilion designed for the residents of entrance VI, Block 23, in the 8th district of Gldani - a vast Soviet-built housing district in Tbilisi, Georgia. Commissioned as part of a collaboration with the Tbilisi Architecture Biennial, 8-23-VI utilises the temporal format of the biennial to catalyse a permanent and public pavilion, with a perimeter of rotating panels that mediate between public and private territories.
8-23-VI connects the semi-private circulation space of Block 23 with the surrounding public exterior by extending and activating the threshold between them. In the context of Gldani’s planned but since neglected public realm, the project re-activates this space as a common ground for collective use, questioning norms of ownership and individuality that have emerged in post-Soviet Georgia.
8-23-VI is supported by the Creative Europe Programme of the European Union and the Royal Danish Academy of Fine Arts.
Metalwork - ALL-P Metal / Plinth - Zviad Chachanidze / Local co-ordinator - Nikoloz Lomidze 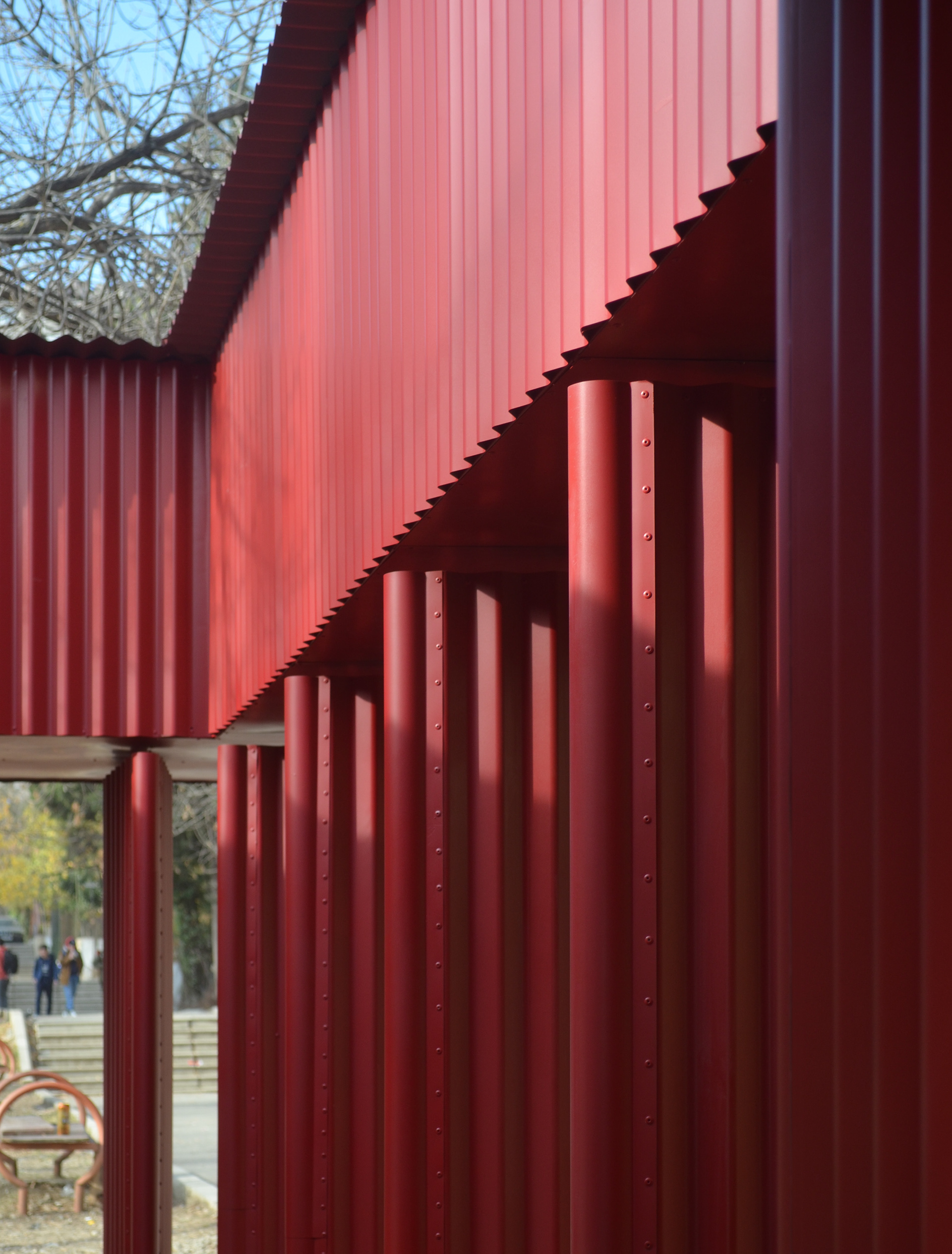 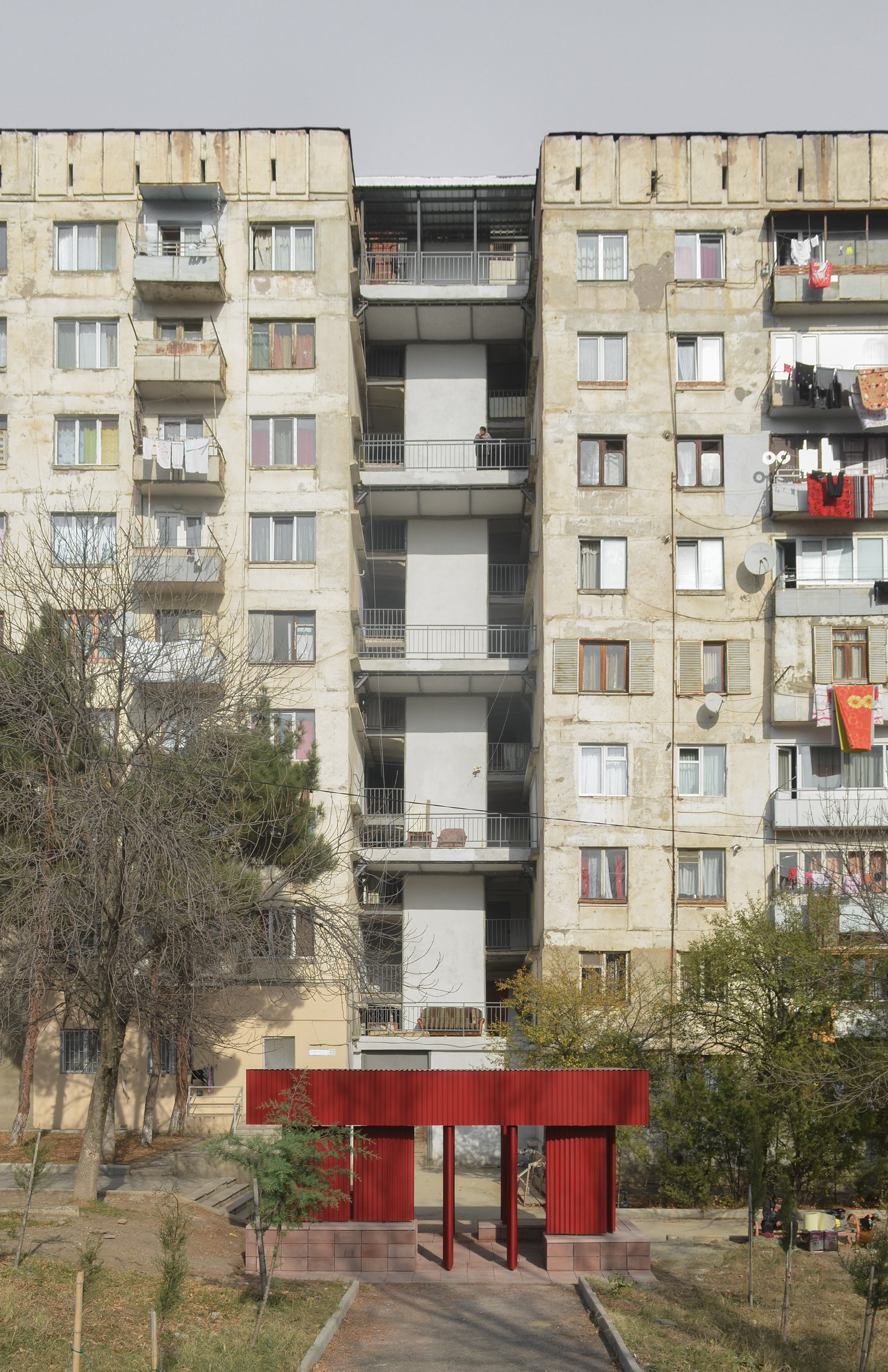 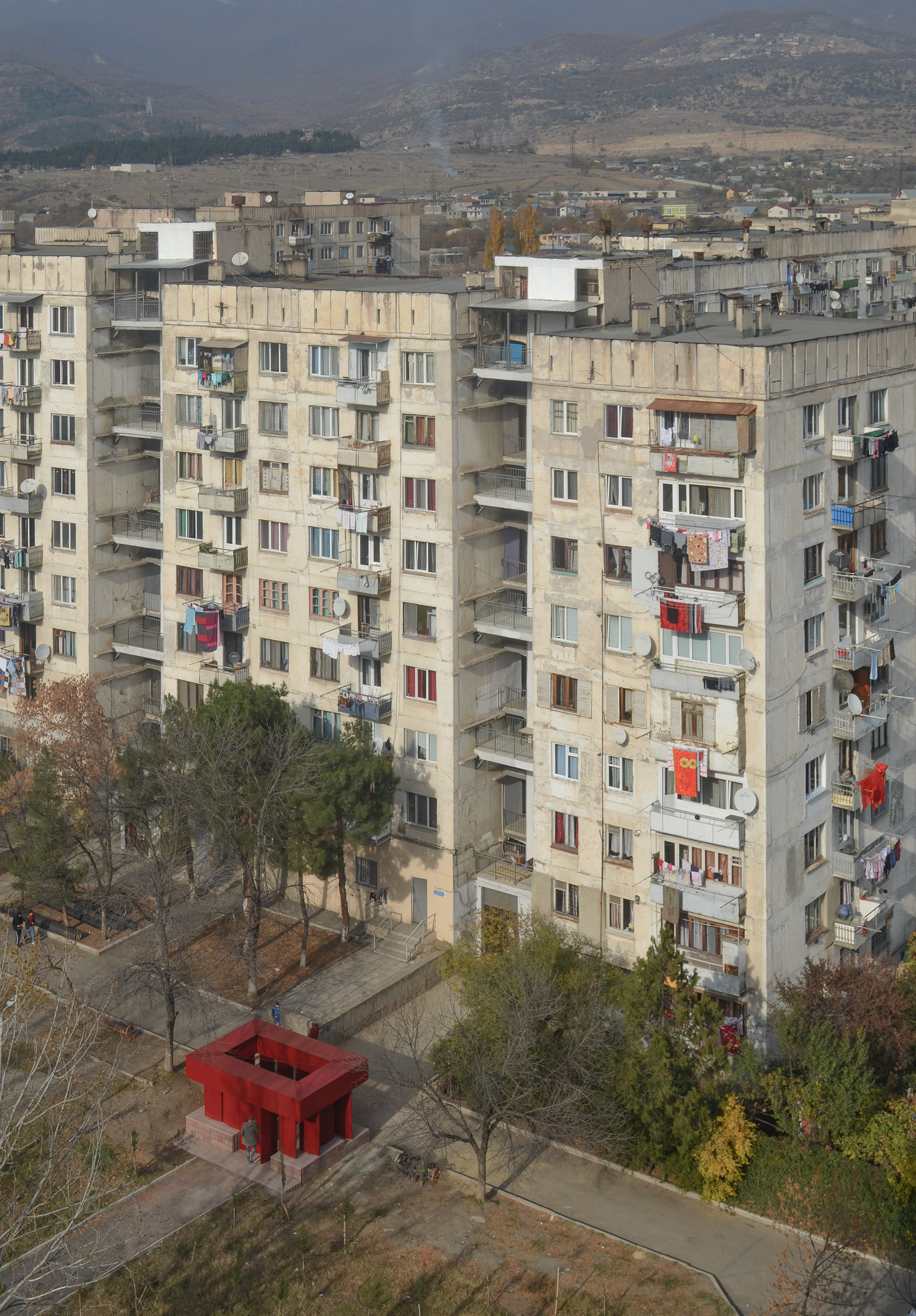 A continuous surface of rotating panels allows the pavilion to be transformed from a private room - an extension of the block’s domestic interiors - to a more open and negotiable public space. The pavilion’s folding walls redefine this relationship between public-private as ambiguous and fluid. By inviting transformation and interaction, the pavilion’s rotating panels echo the strategies of appropriation evident in Gldani’s many self-built garages and extensions, but reframes them as a collective practice.
A bespoke ball-bearing mechanism enables each panel to rotate around a fixed column. These panels are wrapped in proprietary corrugated roofing, tapering towards each corner to form handles with which each panel can be pushed or pulled. The pavilion utilises everyday and familiar materials, but elevates them through their composition and assembly.
An undulating blockwork and timber plinth traces the perimeter of the pavilion, marking it as a threshold to be inhabited in multiple ways. A central opening to the sky reinforces this edge, and the shifting heights of the plinth invites varying forms of adaptation and use.
8-23-VI questions public-private binaries to establish a new common ground for Block 23, with an architectural medium that embraces transformation and collectivity.
Visit medium.works for more. 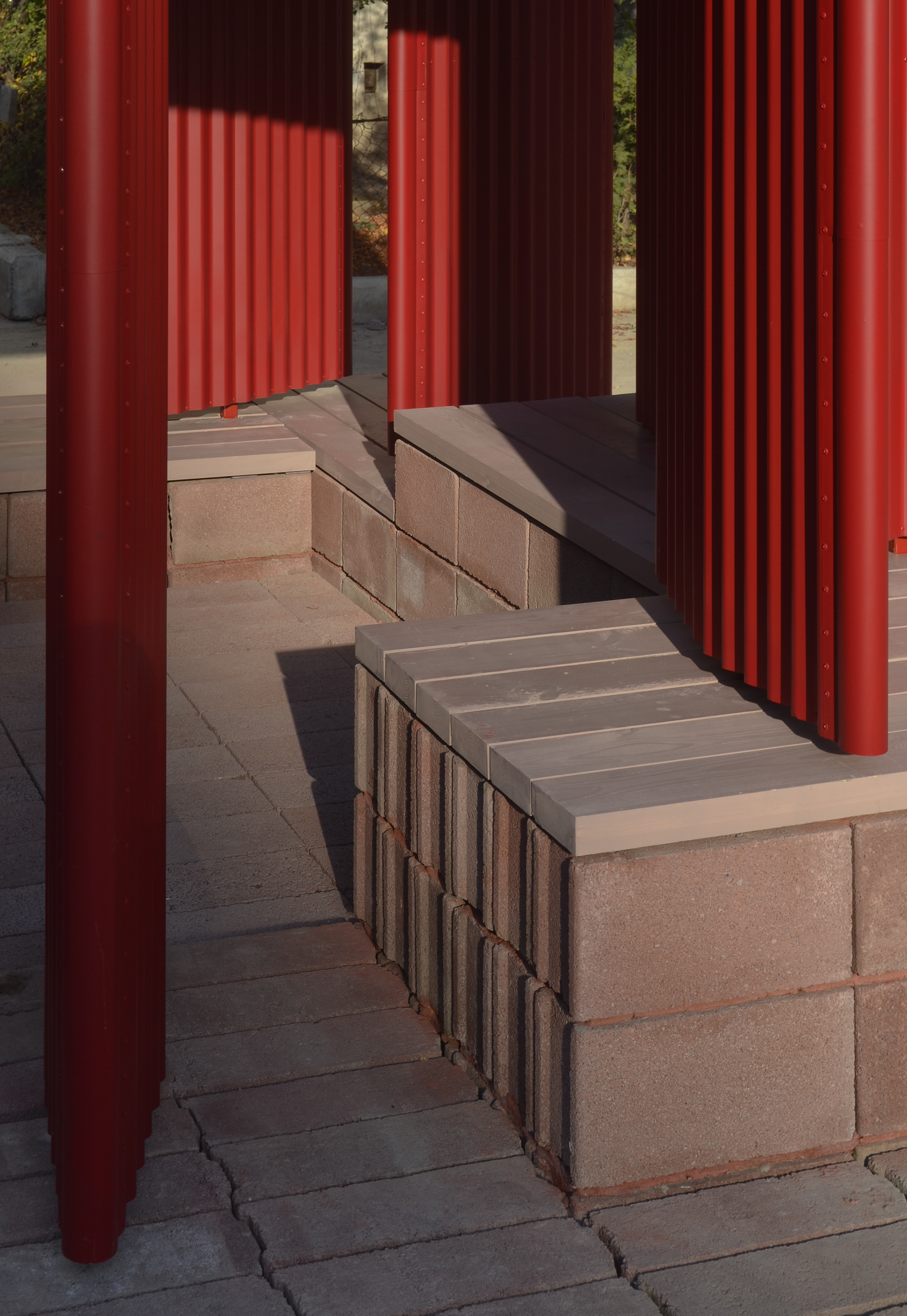 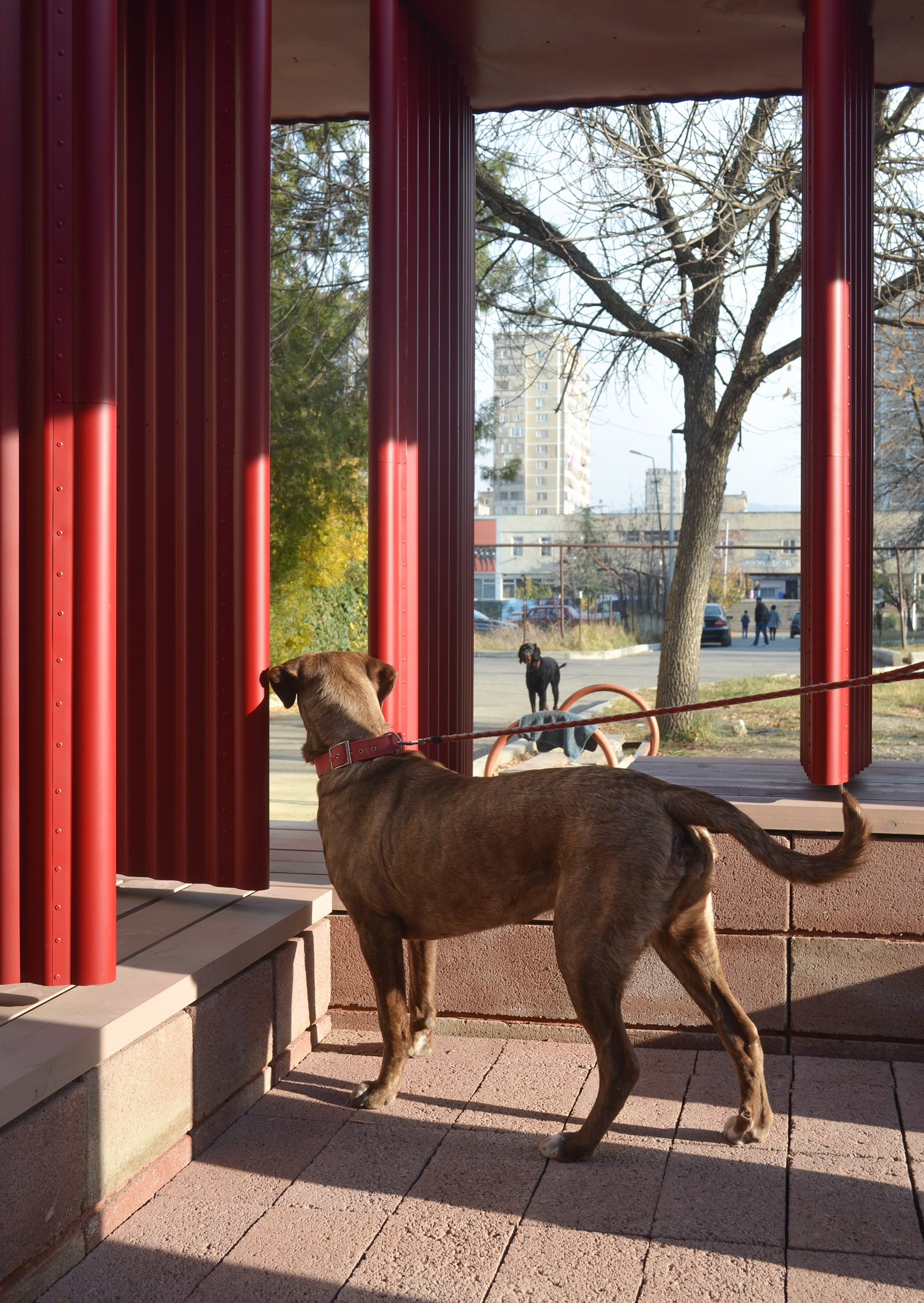 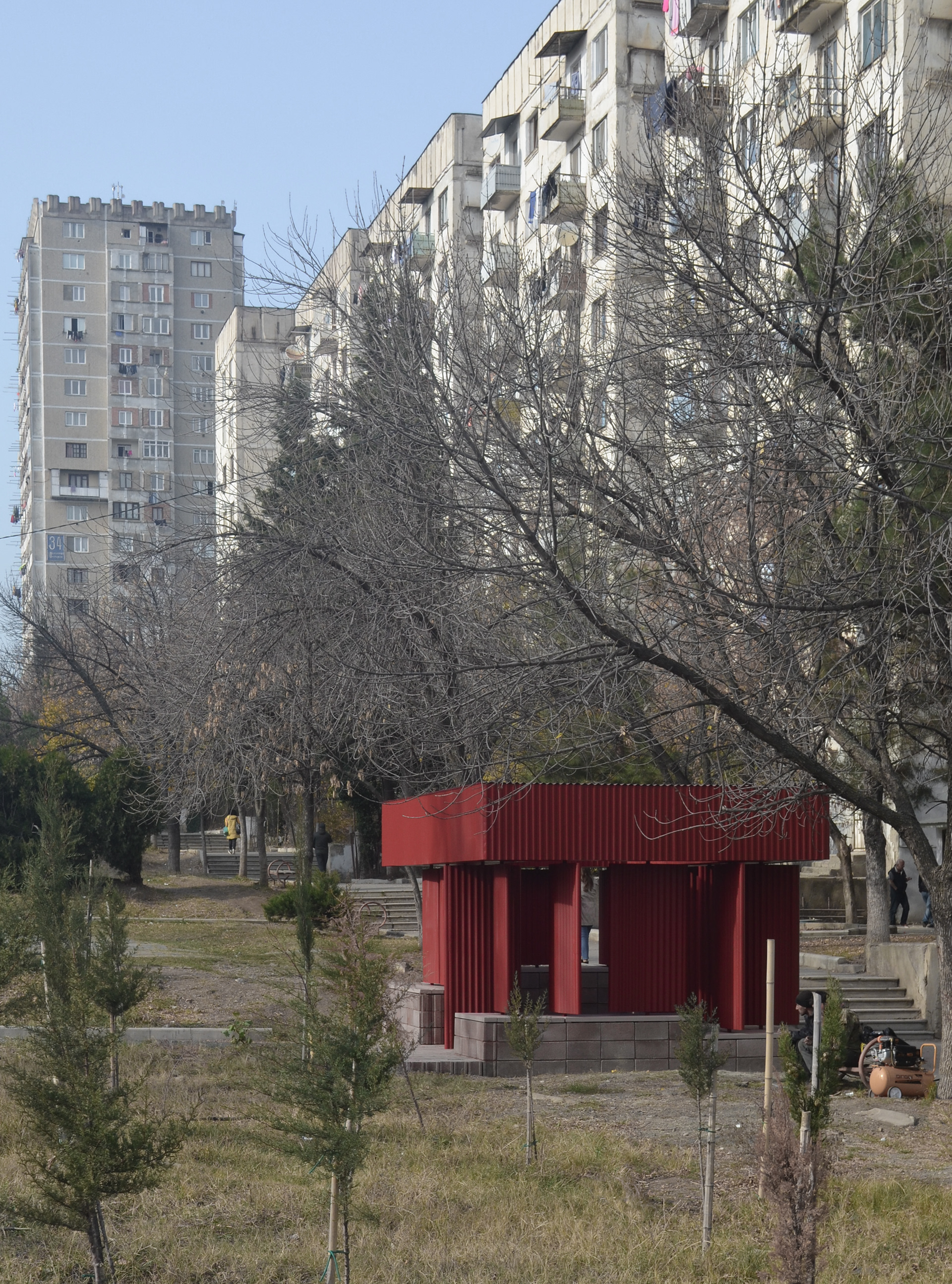 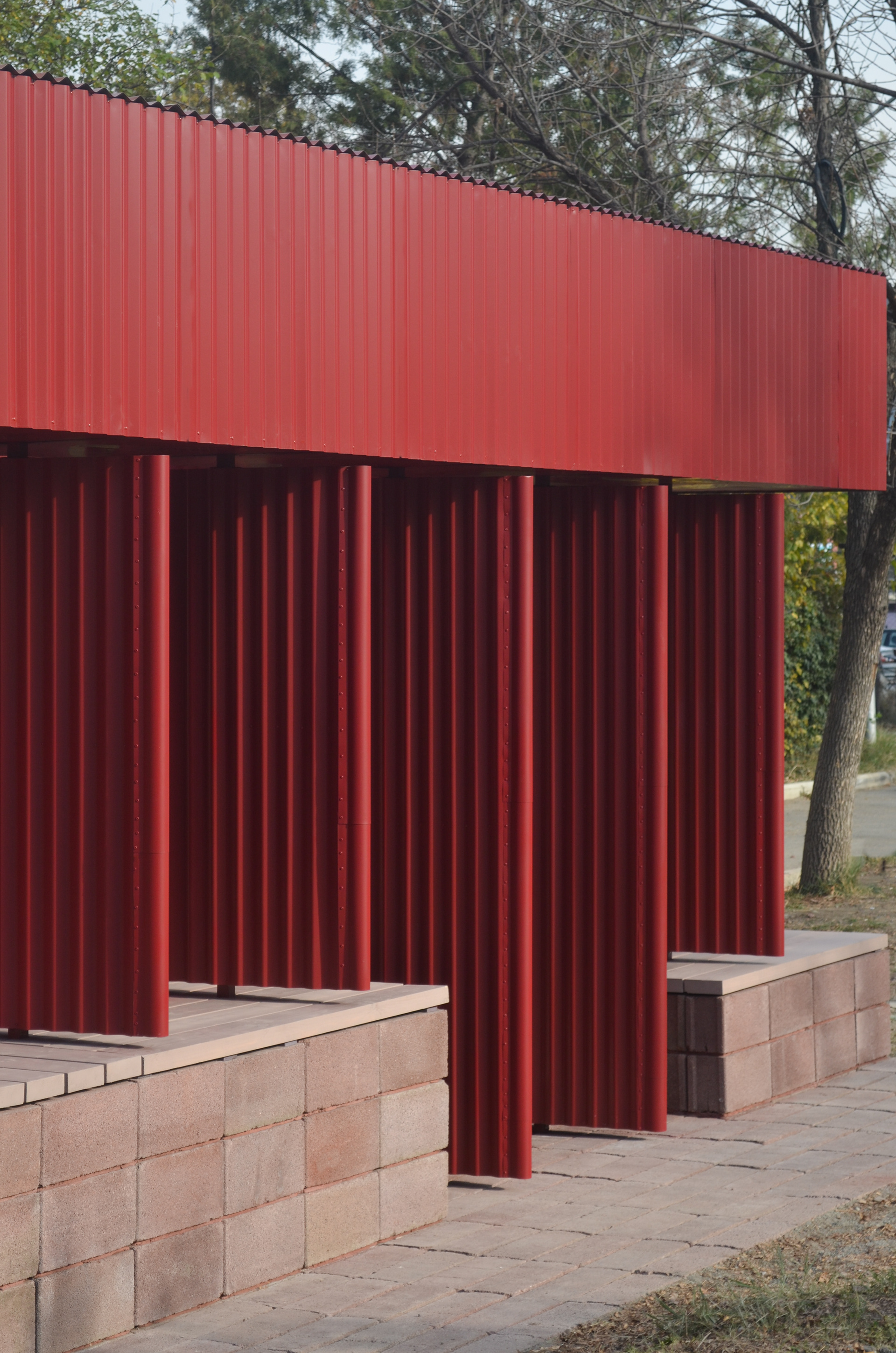 ALL WORKS © MEDIUM 2019.
PLEASE DO NOT REPRODUCE WITHOUT CONSENT.

Insert copy here, which should vary depending on your region. Accept