Budapest is a city of courtyards and passageways, emerging from a rich history of urban destruction and renewal that has earned its city center a position on the World Heritage list. This provides the context for O’Donnell + Tuomey’s recently completed Central European University - a building that echoes the city’s network of courtyards and passages to weave together a number of previously disconnected university departments.
The project brief was for a vast 16,000sqm university campus in central Budapest, and included the transformation of five adjoining historic building as well as the creation of two new buildings that establish a public face for the university. This new entrance is on axis with the Danube river, providing a symbolic image for the institution while inviting both citizens and students to explore its library, learning café and multitude of other public functions. Its limestone façade is sourced locally from the same quarry as many of the city’s historic buildings and respects the parapet heights and datums of the streetscape it sits within, yet is composed of angled reveals, deep overhangs and monumental apertures that mark the building as strikingly contemporary.

The project’s central ambition was to redefine the relationship between the university and the city of Budapest, through establishing new connections between the campus and the surrounding urban realm. The architects saw their primary role as one of surgical intervention, creating thresholds and connections between the previously disparate buildings to create an open and united campus. The new university functions are connected through a series of legible courtyards, each with a distinct expression and character. These courtyards are internalized with dramatic glazed canopies, allowing them to be climatically tempered and used as both social spaces and as circulation, integrated into the university’s campus as well as embedded in a wider urban fabric.The organization allows for communication between adjacent spaces, with ample social spaces to connect and encourage interaction between the various academic departments. While the narrative of designed connectivity and orchestrated collaboration is deployed in explanations of most new educational facilities, O'Donnell + Tuomey’s sensitive and considered design seems to genuinely facilitate this ambition, with a rich gradient of spaces from the open and social to the more intimate and focused.
The architecture doesn’t loudly proclaim these collaborative ambitions through contrived gestures, but rather suggests them as embedded and implicit qualities. 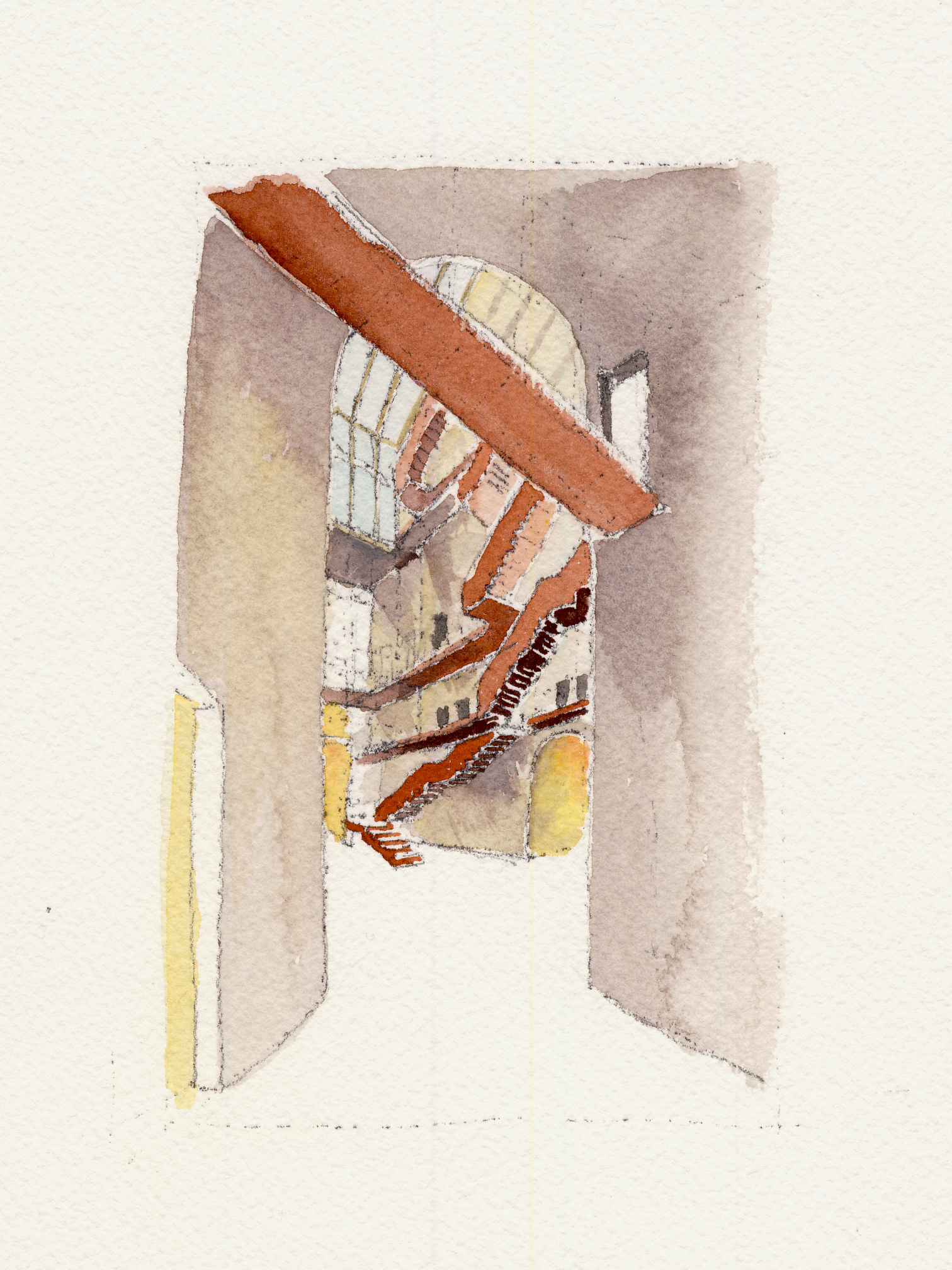 Flying staircases connect department offices to teaching spaces, revealing the more institutional and private functions of the building to the public courtyards. These iconic red staircases were the focus of a watercolor sketch that formed the initial presentation of the project, and after recently winning The Architectural Review’s 2019 Woman Architect of the Year award, Sheila O’Donnell reflected on the determination and tenacity required to maintain the spirit of a sketch through 7 years of development and negotiation.
This conviction can be seen throughout the building, evident at the scale of the overall organization as well as in the refinement of the stairs or the bespoke furniture. It has resulted in a project that confidently manifests the values of the institution it hosts - values of connection, collaboration and openness - while deftly and sensitively embedding the university into its historic urban context.

From Planning to Sectioning

An Architecture of Degrowth

A State of Isolation

The Church of St Peter
↑Back to Top